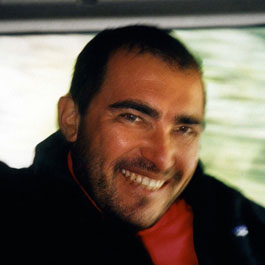 ​Technical Supervisor​
George leads a life split between Architecture Venturing and Sailing. He studied Architecture in Thessaloniki, Copenhagen and Helsinki.

An expert in customised design and project management for high-end residential and commercial projects, is also involved in research on environmentally friendly and sustainable projects. Having been behind almost every major sailing project in Greece, he has led a vast number of sailing projects from dinghies to keelboats, to big yachts. He coordinated and ran 4 Olympic Campaigns in two different Classes, was Operations and Logistics Manager for the New Zealand Olympic Sailing Team for 4 years, Sport Equipment Manager on the Games of the XXVIII Olympiad in Athens and was the Shore Operations Director for Greek Challenge , the Greek America’s Cup Team. A former Technical Director of North Sails Greece and technical contributor to North Sails’ European Dept. he was also Logistics Manager for Okyalos Sailing team and a crew member for 18 years. George set up a number of small companies and now most of his time is utilised through Sail PROmotion in creating value and returning it to the grassroots of competitive sailing. He loves putting together people and pieces for “out of the box” projects that come without blueprints. The last six years George lives between Greece and New Zealand. He leads by example, lives by chance and loves by choice and still plays with Legos.